Nearly Nixed by a “So Called Index”: Microsoft Narrowly Avoids Defeat After PTAB Throws Out Prior Art

The Patent Trial and Appeal Board (the “Board”) recently precluded the use of multiple online references in a validity challenge due to poor indexing.  According to the Board, the lack of organization and search capabilities precluded these references from being deemed “publicly accessible” for use as prior art “printed publications.”

Microsoft filed a petition for inter partes review (IPR) seeking to invalidate two challenged claims of a patent owned by Uniloc 2017 LLC.  The patented technology concerns central radio control in the presence of multiple different networks supporting different wireless devices on different wireless protocols.  Microsoft’s obviousness challenge depended on three internet articles on the Institute of Electrical and Electronics Engineers Standards Association’s website as well as a patent from 2005.  For the internet articles to qualify as prior art “printed publications,” Microsoft needed show they were “publicly accessible,” which requires that someone with ordinary skill in the art would have been able to locate it with reasonable diligence.[1]  When a challenger’s evidence is on the internet, it is key that it show that the information was organized, indexed, searchable or otherwise made available for interested persons to have access to it with a reasonable effort.[2]  Microsoft argued the internet references were publicly accessible because they were stored in the website’s index: 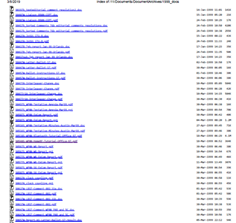 If the low resolution snippet of the documents’ online home doesn’t indicate it enough, the “so-called index[,]” per the Board’s not-so affectionate nickname, was not organized by subject matter and was merely an obtuse, chronological list of article titles with no indicated search capabilities.  This, the Board reasoned, doomed all three of the references located on this website from being used as evidence of obviousness because the average interested person would not normally be motivated to search this abstract list by hand and fish out the relevant articles to render the patent obvious.

Microsoft ultimately prevailed, because its remaining evidence of invalidity was a patent and therefore, by its nature, publicly accessible. This case, however, highlights that the mere availability of references on the internet is insufficient if they are not reasonably accessible, as evidenced by searchability, indexing, and organization.

[2] Voter Verified, Inc. v. Premier Election Sols., Inc., 698 F.3d 1374, 1381 (Fed. Cir. 2012) (holding that a website with some searchability even without extensive indexing was sufficient for evidence of obviousness to be publicly accessible); But see, Acceleration Bay, LLC v. Activision Blizzard Inc., 908 F.3d 765, 773 (Fed. Cir. 2018) (finding that a showing of “meaningful” and “functional” indexing and searchability constituted substantial evidence of a publicly accessible reference).

No luck this week for food-related marks.  The United States District Court for the Western District of North Carolina (“District Court”) and the Trademark Trial

When Neither Case Law Nor Logic Provides A Clear Rule

Before the court, in this case concerning design patent infringement, was a motion in limine to preclude Defendants’ witnesses from testifying about expense deductions from

In Mind or in RAM, a Better Algorithm is an Algorithm