The International Trade Commission (“ITC”) issued an exclusion order prohibiting the importation of products infringing a patent that teaches a self-anchoring beverage container, used to prevent spills. Mayborn was not included in the original complaint to the ITC, and none of the defaulting respondents raised invalidity challenges. Mayborn appealed the decision based on a federal statute that allows the ITC to modify its orders if “the conditions which led to such exclusion from entry or order no longer exist.” Mayborn argued that their showing of the invalidity of the patent was such a change in conditions. However, the ITC denied its appeal, holding that alleged patent invalidity was not a changed condition.

On appeal, the ITC first argued that Mayborn lacked standing to appeal because it had no injury—it continued to import alleged infringing products. Mayborn, in turn, alleged that its injury was the petitioners’ efforts to enforce the exclusion order. The Federal Circuit agreed with Mayborn—it had suffered an injury as a result of the exclusion order, and thus had the requisite standing to appeal, regardless of whether the ITC had already barred importation of Mayborn’s products.

On the merits, however, the Federal Circuit agreed with the ITC that an invalidity challenge is not a changed condition under the relevant statute. First, the ITC may only determine patent validity when it is raised in the course of an enforcement proceeding. Mayborn was not a party to the complaint and, thus, not a part of that proceeding. Because Mayborn was not a party to the ITC action, the ITC did not have statutory authority to make a validity determination through Mayborn’s appeal. Second, a validity challenge—as opposed to a finding of invalidity—is not a changed condition under the statute: the legal status of the patent is unaffected by a mere challenge.

This decision not only demonstrates the importance of companies keeping abreast of ITC investigations relevant to their industry and products, but also, and more importantly, the importance of getting involved in any ITC proceedings that could potentially impact the company’s ability to operate. A party that was not involved in the ITC proceedings is under threat of having its goods excluded, meaning that a party can be impacted by a decision that they did not even defend or participate in. In order to efficiently defend against a possible exclusion order that could bar the importation of a product, it is in a party’s interest to intervene early in an ITC action, before an exclusion order is entered, rather than after the fact through district court litigation. 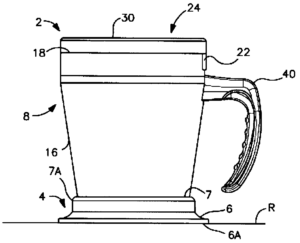 A Splintered Opinion at the Corner of Joinder and State Immunity

On July 24, 2020, in a splintered three-opinion decision,[1] the Federal Circuit held that due to Eleventh Amendment sovereign immunity, the University of Texas (“UT”)

The International Trade Commission (“ITC”) issued an exclusion order prohibiting the importation of products infringing a patent that teaches a self-anchoring beverage container, used to